This is a close-up of the Douglas-fir, the tree perhaps most synonymous with the image outsiders have of the Pacific Northwest, an archetype which arguably-speaking may be borrowed principally from the drippy, western side of the Cascade crest, which is a true-enough dark green paradise, yet even inland the Douglas-fir’s range is extensive, occupying a variety of zones and niches.  When we look out the window across the valley to neighborhoods with names like Madison Park, Denny Blaine, Madrona and Leschi, Douglas-firs ring the horizons of hills and ridges, maybe not densely as might be imagined, most of Seattle’s biggies having long ago been appropriated for the construction of Italianate and Victorian row houses in places like San Francisco. I’m not about to get highly technical in this space about how the Douglas-fir isn’t even a true fir, a distinction requiring one to never forget the hyphen although simply pushing them together like Douglasfir will also do the trick, but there are a lot of fascinating things about the Douglas-fir one ought to know, like how those famous California redwoods really have nothing on them when it comes to tallest heights except Douglas-firs happen to grow in one of the most productive tree-growing regions in the world where forests have comparatively-speaking been treated like more of an agricultural commodity (not to dismiss the plight of the redwoods, which have their own set of serious problems). 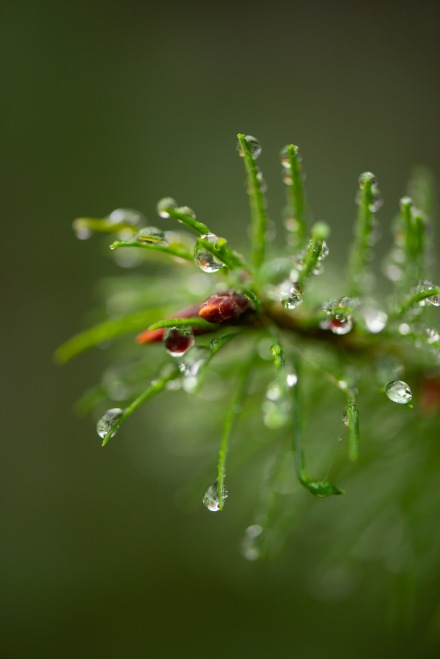 Lately it feels as though I’ve been leaning inordinately heavy upon monochromes muddy with midtones, calling to mind stacks of old newspapers or those research sessions in the days of yore behind the satisfying whir of a microfiche reader. This frame is just to feel freshly scrubbed and nice, I dunno. The plane of focus here was a little tricky, it was a dark, breezy autumn morning on the back porch. As much as I would’ve preferred lining up those jewel droplets like a constellation inside of a huge depth of field, shooting faster wide open on just one cup of coffee compelled me to choose the less glamorous bud, that brown tip which is each spring’s reminder that I’m a certain kind of fool for planting this tree in our backyard.

You may cut me down after you’ve heard all this, I don’t mind. It was several years ago, I was quite aware of the  extreme inappropriateness of this selection for our tiny backyard but I’m not that person, whose name you curse as you pick up the giant, broken limbs from my tree which have fallen onto your Rhododendrons, prized Petunias or whatever. Rather, I was feeling sentimentally, if falsely, empowered imagining myself playing a symbolic role in temporarily restoring the city’s canopy to a shadier state, in effect counterbalancing the flood tide of new construction across the hill. Looking down at that pointy stalk mostly devoid of needles, marked with a blue tag for 50% autumn clearance at our neighborhood nursery (currently slated to be torn down in favor of tony apartments above a fancy co-op grocery store) that pitiful thing barely more substantial than a seedling due to summer neglect owing to its positioning behind Evergreen huckleberry and Oregon grape, priced now at the cut rate of five dollars, I gave Paul Bunyan a kick in the shins. Rationalizing my logic easily enough as a bit of placeholding, fully intending to cut the little number down before an industrial stump grinder would be required, all I had on my mind was a bit of sustainable gentleman forestry, à la Gifford Pinchot. Next year’s Christmas tree? Of course, trying to explain this to my neighbor, green thumb extraordinaire and card-carrying member of Plant Amnesty, elicited only astonished, stupefied slow shaking of the head. People just don’t get me. Douglas-fir I get all too well. To wit, years ago struggling in vain at some ungodly hour inside of a Lane County mill, grading some of the last top-shelf Dougie-fir, an ugly, big ol’ splinter four inches long came slicing through air on the belt, somehow got under the heavy leather apron I was wearing and caught me right in the belly button like a doggone safety pin, turning my outie into a festering innie for countless weeks so whenever the boys bring a bad splinter to me I get mighty serious. There’s also the frightening daggers we get right outta the old fir floors beneath our feet which penetrate the thickest woolen socks of the maddening shuffler, so pick up your feet but don’t be an elephant stomper.

All fifteen of Seattle’s major parks were closed this weekend, including the Arboretum, to encourage social distancing on a fabulous sunny weekend. It was fine with me to stay home, Friday morning was a little fiasco at the hectic grocery store, a dozen large brown eggs for pancakes, waffles and scrambled eggs went flying out of a rather precariously-perched paper sack atop my shopping cart, landing with a sickening, crackly thud on the ground, right outside the automatic sliding doors. What a waste! That seemed like an omen, if ever there was one. The boys and I went for a long walk this afternoon, south through Madison Valley, climbing gradually to East Pine in Madrona where we looked back and waved to our tiny house which can be found by effectively utilizing Holy Names’ dome as a transit level. Later on, four of the six feet got a little sore in Leschi via a winding, curvy road that called to mind Mulholland Drive, dropping down to Lake Washington whereupon the mothership was signaled. You know, for a ride home.

postscript: I wrote this last night when I was pretty tired so as usual it got a little silly. The boys and I did the same walk again, this afternoon. Except we made it all the way to Judkins Park, 3.5 or 4 miles after a few comedic side trips in search of a private place in the trees (thank you Douglas-fir in Frink Park) for Oliver Fern to relieve himself.