how to have a miserable fine day on mount constitution

One of the minor problematics visiting a place like Orcas Island during spring break is the smallness which can make it tricky to fully appreciate some of the common charming delights as there’s a tendency to run into the same people for a few days but sometimes you get lucky if you go walking on a miserable rainy morning when everyone else stays inside to play games, make out or eat. Excellent activities all, but we buttoned up and faced the elements on a short path at the base of lofty Mt. Constitution. The boys were happy as clams in the rain because they love trees and moss. On the other hand, I was feeling a bit cross with myself. A steady downpour was not what I had in mind when I convinced everyone at the cabin we should go across the island and listen to the pitter-patter of raindrops in the woods (and maybe accomplish a little shooting of several pretty waterfalls). 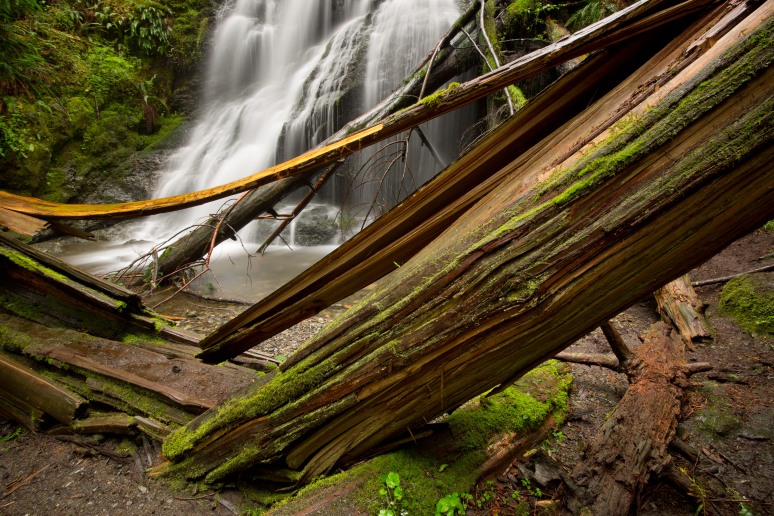 After shielding the tripod with an umbrella in one hand and manipulating camera controls with the other, I felt as though I should join the circus. Rain severely limited my composition choices- my Nikkor 16-35 mm has a skimpy petal-style lens hood and I wasn’t in the mood to wipe down the glass between every single shot, too tedious. Consequently, I’m a little disappointed at the lack of gravitas in any of my waterfall pictures: There’s a ton you could do here artistically-speaking, but I was pretty much stuck hiding behind logs to stay dry. Nevertheless, I hope this is still an enjoyable image for my readers. On the other hand, we had the whole place to ourselves and that was pretty worth the aggravation. Fallen trees across spillways are a fact of life in the rugged Pacific Northwest and I liked this scene and the story it told in my imagination of thundering and splintering. The boys were giddy with delight crawling up-and-over fallen logs, they probably walked through half my pictures but since most of my exposures were in the neighborhood of 30 seconds, it didn’t matter so much since they’d be rendered invisible and I generally only yelled at them for moving wood around like furniture (why do they do that?) or jumping up and down too close to the tripod (in a soggy forest like this I need a child-free radius of at least fifteen feet). So it really was nice.